This profile moderated by Jon Armstrong. 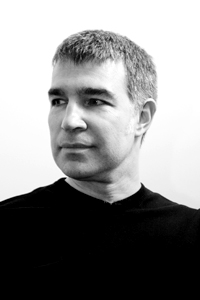 Jon grew up outside Seattle, State College, PA., and Columbia, Maryland. His parents both have fine art and art education degrees and his childhood was an extended art class. As a boy, his heroes were Buckminster Fuller and Jack Benny.

In 1986, after finishing a Liberal Arts degree at the University of Pittsburgh, he moved to New York and worked at a Japanese travel agency for several years and later had a short stint with Pan Am before the airline went bankrupt. Subsequently, he became a temp and gradually taught himself graphic design. As a graphic designer, he worked for such companies as United Media, Young & Rubicam, Archie Comics, HBO, and many others.

He currently lives in Queens, New York with his wonderful wife and child. 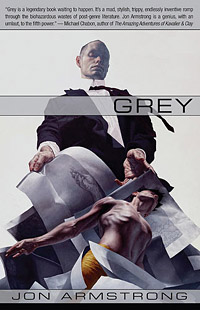 Grey was published by Night Shade Books in February 2007. The book is available as a free podcast at Jon Armstrong.com, PodioBooks.com, and iTunes. It is also available as a free text download from NightShadeBook.com as a PDF - HTML - Rich Text Format - Mobipocket.

In 2007, Grey was nominated for the Philip K. Dick Awards.

Jon is currently finishing his second novel, Yarn, which is a prequel to Grey. Set mostly in the sex and shopping destination of Seattlehama, it follows the rise of Tane Cedar from the poverty of the slubs, to the hights of high fashion.